Does French jazzman Erik Truffaz qualify as a songwriter? To be honest, I’m not sure. Perhaps more a composer. But I like his stuff so much I couldn’t resist sticking it here as well. This interview was originally published by The Bulletin, Belgium’s newsweekly in English in February 2002. 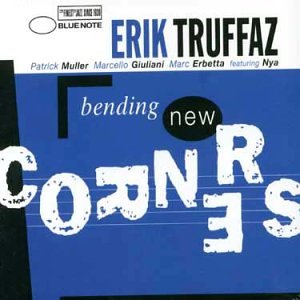 When does a trend become a bona-fide genre? The question is worth asking in jazz, as elements of groove and electronic music have been creeping into a number of musicians’ styles for the past five years or so. Things came to a commercial head with St. Germain’s breakthrough “Tourist” album, but well before that musicians had been bending jazz – somewhat against her will – towards a modern ear.

Frenchman Erik Truffaz is in many ways a dream musician. As a trumpeter, he plays in a soulful, open-ended style that is steeped in the history and mythology of jazz. But unlike many contemporaries, the windows of his jazz are wide open. When he set his pure, melancholic licks against a hip-hop/groove backdrop on “The Dawn”?, he created a milestone recording. It was followed by the equally impressive “Bending New Corners” and a string of concerts, including shows at the Botanique and Cirque Royale.

With “Mantis” (Blue Note, distributed by EMI), he has stepped back a little towards a more classic form of jazz. His quartet of Manu Codjia (guitar), Michel Benita (double bass) and Philippe Garcia (drums) plays with an easygoing respect for the masters. As Truffaz plays a cool trumpet, comparisons with Miles Davis are frequent – and not necessarily unfavourable. Apart from stylistic considerations, Truffaz and Davis are both musicians playing for their respective ages. Davis incorporated rock (and later funk) into jazz, Truffaz uses the colours of drum’n bass and hip-hop.

“Mantis” is a proud heir to the Cool School of the sixties (Kewl Skool, anyone?). The bare sound is, according to Truffaz himself, a natural choice. “I like places that are Spartan: mountains, deserts, Japanese architecture. Music is perhaps a metaphor of this”? He was in Brussels for a string of interviews. “I try to make the music different, but most of all that it be a bit like me?” Truffaz’s music has inevitably drawn flak from crusty jazz critics appalled at the arrival of any form of electronic influence in jazz. Truffaz remains diplomatic. “I think every form of music has its core of people who are closed and others that are open. I’ve played in hip-hop circles and they’re very closed, although there are always a few people open to jazz. In drum’n bass, you’ll always find someone who says that if it’s not within a given tempo, then it’s not drum’n bass. That’s human nature.”

The departure from the previous three albums is due to that band being put on hold rather than any need to depart from the style. “They’re just tunes I wanted to record. But it’s true that when I start an album, I like to give it an elements of drama, like a novel with moments of tension and others of calm.” Alongside the modal jazz elements, some surprising tones: almost breakbeat-like drum patterns, bass lines with the depth and edge of drum’n bass, a delightful plaintive duo with an oud, heart-rending Arabic singing from Mounir Troudi and Codjia’s flamboyant electric guitar solos. “I couldn’t ask musicians to play like that if they weren’t totally into it themselves,” says Truffaz. “Of course, I was a bit afraid that the audience wouldn’t follow me on this album, but they have. Globally, I see more people discovering jazz through our music than jazz fans discovering other styles.”

Questioned about the music he had brought with him, Truffaz comes alive: “Anya Garbarek, daughter of Jan, who combined woodwinds with electronic beats. Graham Haynes, son of Ray, who plays trumpet over electronic music. Jon Hassell, one of my biggest influences, who has worked with Brian Eno. He was already experimenting with pop and jazz in the seventies. There’s some incredible music out there.”